According to Nef'i The Essence of Utterance

Facts that are the source of art, and in particular poetry, alwayss have great importance in comprehending and interpreting the work of art. Examining the sources that the poet feeds on while creating his poetry allows us to understand the meaning he wants to convey to the reader in his work more realistically and ensure we understand it from the poet's point of view. Nefi, the 17th-century poet of classical and Turkish literature, is the subject of our article; He is a poet who influenced many poets who came after him and broken we ground with hiseulogy. Nef'i questioned the sources of poetry in terms of the value of poetry and wanted to base it on the highest source in terms of existence. Facts such as revelation, inspiration, divine secrets, truth, imagination and thought were the source of Nef'î's poetry. He expressed on various occasions in his odes and ghazals how these facts became the source of his poetry. According to Nef'î, poetry should Express the secrets of God and the truth by feeding on revelation and inspiration, and the poet should achieve artistic creation with the power of imagination and thought supported by the revelation of divine knowledge. Nef'î's poetry, which is based on a süblime source such as the revelation and the secrets of the Truth, finds a place for itself in the ontological nature at higher levels. This situation reveals to us the value of poetry in the poet's heart.

classical Turkish poetry, Nef'i, art, the essence of the utterance, illusion and realty 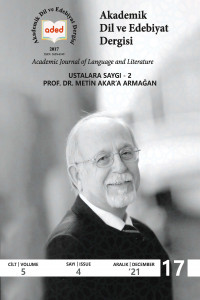