This study deals with the situation of the society, which started with modernity in the globalizing world and faced the threat of secularism in the process that evolved into post-modernism. Secularization comes from the Latin word saeculum, which means "century-era". Later on, the meaning of "world" or "life incompatible with God" was attributed to this word, and eventually it began to be used to distinguish between church law and civil law. Scientists who witnessed scientific progress in Europe after the enlightenment period and were overwhelmed by the injustices and pressures of the church on society began to defend the thesis that as long as this progress continued, religion would not be able to withstand this rise and would one day perish. However, since these prophecies did not come true, after a while, such discourses left their place to statements such as "humanity will get rid of the theological period with social evolution". After a while, this way of thinking took its place in social sciences with the expression "Secularization theory". The main idea of this theory: In the face of modernization, first religious institutions, then religious practices and finally religious consciousness would lose its social meaning. In accordance with these meanings attributed to secularism in general, God has been removed from the mind and heart world of human beings. Here, with the removal of God from life and the purification of the world from all thoughts belonging to the sacred, an understanding of redesigning life according to the requirements of the age and reason, not by God, under the name of secularization, entered the agenda of human beings. With secularization, which is a process in which religious thought is completely removed from social life, it is aimed to weaken the effect of everything religious on human life and to completely regress its effect. Our aim is to try to determine how modernity affects the moral and religious life of today's society. Because in this process, which started with modernity and continued with post-modernity, the social structure brought along a new human typology. The view of this new human typology on religion and spiritual values has started to show negative features day by day. In this sense, while secularism discredits religion and its values by substituting reason for revelation and its messenger, the prophet, it has given the mind an endless field of action. This situation has turned people into an extremely carefree spirit in the face of revelation. This effort will cause Islam, which has the quality of being divine, to lose its influence on people and to be perceived as a human philosophy, thus negatively affecting the ability of Islam to transform people. In addition, in the social arena where secularism and a deistic understanding of God are dominant, personal interests and interests will come to the fore under the name of westernization and modernization, and this will lead to the formation of a new human community with a hedonistic understanding. With a theological understanding that there is no revelation, God is portrayed as a creature who has only done his job as a creator, while the mind has been pushed under a burden that it cannot bear with the unlimited range of motion given to it. Thus, man has created a new religion, a new god, a new way of life in this field according to his own interests and interests, and has chosen the secular life as a way of life by giving the name of religion to this new situation that he has planned. Of course, because of the Qur'an, Islam has a solution proposal against the secular threat. It is seen that Islam emphasizes the hereafter life, which has a preventive and guiding meaning against the secular understanding of life. When we try to understand secular life with the literature of the Qur'an, the closest expression to it is the concept of al-Hayâtü'd-Dunya. When we analyze the etymological point of the word "world" in this expression, it will be seen that it has a meaning rather than a place where desires are satisfied. According to the Qur'an, thanks to the unity of the world and the hereafter, the spiritual stance established by faith and behavior makes it possible to build both lives at the same time. On the other hand, the belief in the transience of worldly life and the eternity of the hereafter encourages people to work continuously, to do good deeds, to develop and to build the earth together in the best way, while the positive behaviors that are stated as a barrier against religious, moral, social deviations and injustices for a lifetime. ensures its permanence. A state of consciousness emerges in every individual who grasps the integrity of life in this world and the hereafter, and has a firm belief in the existence of life after death. 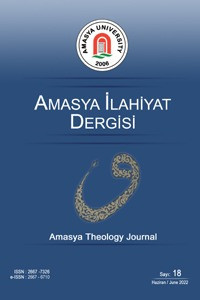