The aim of this study is to investigate the effect of troponin levels on the prognosis in patients diagnosed with PTE (Pulmonary Thromboembolism).

Patients with PTE diagnosis were divided into two groups: Group 1: Patients who died in the 30-day period after PTE, Group 2: those who did not die during 30-day period after PTE. When comparing the groups, Student-t test was performed for data adhering to normal distribution and Mann-Whitney U test was performed for data not adhering to normal distribution. Frequency data were compared with Chi-Square test. ROC analysis was performed to determine the troponin prognosis level as a result of the statistically significant relationship between troponin and mortality and appropriate sensitivity and specificity cut-off values were determined.

When the relationship between the troponin levels and the prognosis of patients with PTE in the emergency room was evaluated, it was found that the troponin values were statistically higher in the group with mortality (p=0,031). And because the Area Under Curve (AUC) value was calculated as 0.636, the troponin value was found to have a weak-to-medium significance for predicting 30-day mortality.

Troponin levels were significantly higher in patients who died in one-month period compared to the survivors in the same period. However, we believe that troponin values are not clinically useful as a marker of mortality due to low specificity and sensitivity ratios. Yet, because of its significant relationship with increased mortality, PTE patients with high troponin levels should be hospitalized and monitored more closely. 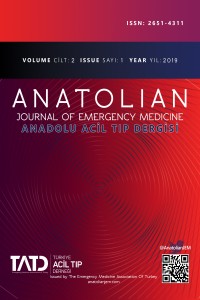