The confrontations between the parties in the Turkish political tradition continued in the 1950s as well. The process, which started with the efforts for coperation by the opposition parties against the government under the leadership of the Republican People’s Party, continued with the statement of Prime Minister Adnan Menderes that a Fatherland Front would be formed. After the speech of Adnan Menderes, the Muş Democrat Party provincial organizations also worked to ensure peoples’ participation into their sides. As a result of these efforts, many people which were members of the Republican People’s Party and other opposition parties in Muş, informed the Prime Minister Adnan Menderes and the Democrat Party Headquarters individually or collectively that they joined the Democrat Party and Fatherland Front. The reflections of these electoral shifts between the parties in the province of Muş led to the change of the political balances in the province and the increase of the political struggle between the parties. This study handled and examined how and in what way the Fatherland Front affected the political athmosphere of the Muş province during the 1958-1960 period. 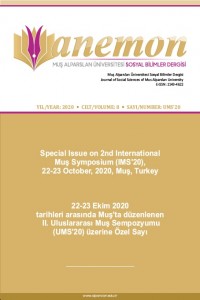