Although it is not certainly, Baba Tâhir-i ‘Uryan is was a great sufi and poet who lived in the city of Hamedan in today's Iran in the second half of the 10th century and in the first quarter of the 11th century. He left four works behind. These are a diwan named Dûbeytîl, written in the dialect of Lori, and his work, which is written in the form of an Arabic prose called al-Kelimâtu'l-Kisâr and is almost like a sufi glossary. Baba Tâhir generally deals with divine love in his works. Through this article, after giving the life of Baba Tâhir-i ‘Uryan briefly and introducing his works, we will check his views on the individual and social criticisms he mentioned in his works. 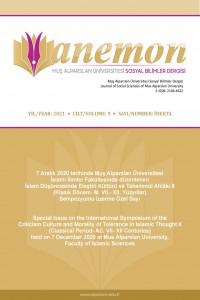