This study aims to conduct a bibliometric analysis of different indexed sports management articles published in the Web of Science database for researchers working in the sports management field to recognize the relevant field. The research is descriptive in terms of revealing the current situation as it is without making any changes. Articles on sports management, which are published in a certain time frame, were evaluated within the scope of this cross-sectional research, one of the descriptive research types. The Web of Science database was used as a data collection tool. The population of the research consists of articles on sports management published between 1992-2020. The simple random sampling method, one of the probability sampling methods, was used to determine the sample and the calculations were made at a 99% confidence interval and 1% error ratio to determine the sample. Considering that the entire sample could be reached, the entire population was included in the study. Descriptive statistical methods were used for data analysis and the results were shown in graphs. The publications examined in the research were evaluated according to publication years, number of publications, indexes, citations, research paradigm, number of references, impact factors, qualifiers of the journals, and countries of authors. As a result, it was seen that the number of sports-themed studies increases day by day, that the number of citations is higher in the articles in the sci and ssci indexes, that the paradigms used in the studies are methodologically designed as qualitative and quantitative, and that there is an inverse proportion between the number of articles published and the qualifications of the journal in terms of impact factors. In other words, although the number of articles increased, the quality had an opposite course. 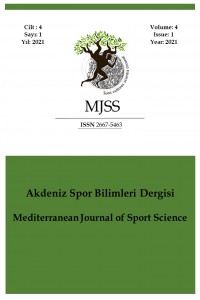