The documentary films of the cinema, which includes many genres as it is composed of a combination of many art branches, have different styles. Based on the facts of the society, the most important truth of the Turks in the recent period is the establishment of a new state based on national sovereignty, together with the struggle for independence, by choosing the principle of “living as a dignified and honorable nation”. The “intersection and breaking point” of the event, which lasted for five years between 1918-1923, was Erzurum and its Congress. Based on the realities of the society, the documentary The Land of Hope, which is projected and shot by TRT, about the documentary genre of the cinema, provides both a technical and academic integrity, the recent past of the geography where the threat of the destructive element was felt the most, the days when the incident took place, the places that have reached today and the academic offices. has revealed by supporting it with flowing images. The step of the social, individual and legitimate existence struggle in the Anatolian movement was reflected in the film. Purpose of the study; It is to evaluate the experiences of Anatolian Turkishness a century ago in terms of communication sciences and filmmaking through the documentary “The Land of Hope” produced by transforming them into documentaries based on documents, memories and researches. 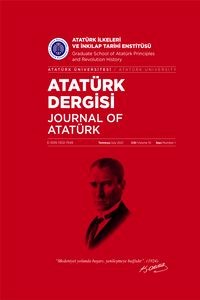