In recent years, geopolitical rivalries within the international system have been gradually increasing. It’s evident that nations that are under attack, fragmented, and militarily weak in geopolitical rivalry have no other choice than going to a war both traditionally and cognitively to survive. Military operational victories do not mean victory in cognitive warfare, and the conquest of target audiences’ mental functions is essential to win the war. With cognitive warfare planning, the mind map of the target audiences is drawn, and a suitable environment is prepared for the public to support the struggle, apart from focusing on traditional security measures. The battleground for cognitive warfare is the mindset of society, and properly planned cognitive warfare operations help overcome chaos and uncertainty. In this sense, the attack launched by Russia on Ukraine on February 24, 2022, is the scene of operations that constitute a wide range of cognitive warfare, and affects the whole world, although the outcome is still uncertain. The narratives, stories, representations and micro-mythology created in various dimensions and reflections of Ukraine’s cognitive warfare operations are closely followed by mass media all over the world. In this war, in which the non-military aspects of the RussiaUkraine War are also important, Ukraine desires to manage the perception of the international community on a large scale and tries to create behaviors that determine their identities. This article addresses the narrative strategies of Russia and Ukraine during the war that started in 2022 and continues until today; and it evaluates Ukraine’s cognitive warfare operations from various perspectives and examples. 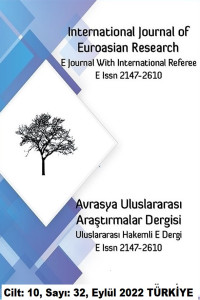