Sumac Extract and Its Use in Kahramanmaraş Cuisine

Having different food culture characteristics among regions, Turkish cuisine has different local products and food culture in provinces close to each other. In traditional Turkish cuisine, sumac seasoning, which is usually served next to meatballs and kebabs, is often used in regional dishes of the Eastern Mediterranean and Southeastern Anatolia region. Sumac, whose fruits are used as spices in Turkish cuisine, is used as extract in Kahramanmaraş province, and in neighboring provinces, sumac fruit is used by keeping it in water and obtaining its sourness. August and September ripening sumac fruit, after drying, washed and left in sour water. The resulting sour water is left to darken in the sun until it reaches the consistency of syrup, and the sumac extract becomes ready. Sumac extract is preferred as a sauce in sour dishes or in order to give sour taste to sour dishes. In the study, the interaction of the culinary culture of the eastern Mediterranean region with other culinary cultures and the general characteristics of Kahramanmaraş cuisine, the use of sumac sour in regional dishes produced in a local way and the effects of sumac on health were mentioned. 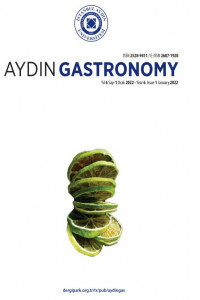