The most important works that carry the historical legacy of a societyto the future are written works. As this written work becomes a book of a sacred religion, the value of writing becomes even greater. Because of the value given to the writing of the Holy Qoran, Muslims tried to convey the book of the great religion in the most beautiful way as if embroidering it on the stone, and it succeeded. Since the Ottoman period, Mushaf’s written on leather gave the most beautiful examples in the period of Seljuk and Ottoman states. Especially the handwritten artifacts that have been exhibited daily and exhibited in the museums from the Ottoman state period are among the most beautiful handwriting works. These artifacts, which are concentrated in the great cities of the Ottoman Empire, the type of line he writes, the nature of the paper used, important information such as the people on the line and the foundation. The Qoran, located in the village of Bozkanat in the Solhan district of Bingöl province, has an important place in terms of being a manuscript Mushaf in a small region. This Mushaf, which we have been working on since 1803, has been handed over to the Cultural Directorate on condition that it will be left in the family in the village of Solhan. The examination of Mushaf, which is highly destructive, will shed light on the historical accumulation of the region. 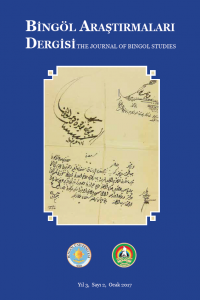