Temran/Baghlarpınar village became the center of liva after Mohammed Bey’s designation to Kighı liva in 1296 (1782). Muhammed Bey has settled in Temran/Baghlarpınar village where he build a residence and a mosque, since 1296. In his inscription, there are graves belonging to the persons from the family of Muhammed Bey around the mosque were apparently built in the year 1219 (1804). It is seen in the graveyard of the Mosque Hazira that there are tombs belongs to Muhammad Bey’s son Feyzullah Bey, his daughter Esma Hanım and his wife Pakize (Emine) Hanım. On the tombstones of the Hazira tombs, cypress trees, the seal of Solomon, plant and geometric motifs, as well as a significant number of poems are also located. 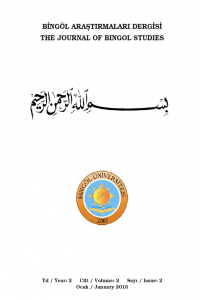