The city of Debre, which was connected to the province of Manastir during the Ottoman period, remained under Ottoman rule until the beginning of the 20th century. The city has played an important role in the conquests of the Ottoman Empire in Eastern Europe and Balkans. For this reason, as in all other Balkan settlements, the city of Debre was given importance to the construction and development activities by the Ottoman Empire and the bazaars around the mosques and the physical growth of the city were directed. This building, also known as the Hynkar Mosque, was built in 1467 by Fatih Sultan Mehmed Khan. The mosque is located in the city centre of Debre. Hunkar Mosque is the only monumental building from the thirteen mosques built in the Ottoman period. The mosque is located in a great hazire. Hazire is burial area reserved for special people especially in mosques or Sufi lodges. There is also a tomb building in the hazire. Nowadays, the building which is still a mosque has been registered as an ancient work by the Macedonian Board of Monuments. There is no monographic research on the architectural structure of the building up to now. In this research, the architectural characteristics of the Fatih Sultan Mehmed Mosque are examined in detail. It is thought that the findings of the research will contribute to the restoration phase of the building. 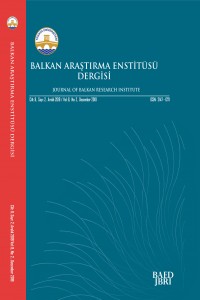