Âşık Çelebi, who was mostly known for his biographies of poets in the 16th century, was educated by the great scholars of the period from a young age and is one of the personalities belonging to families that have a reputation from both his parents' side. Âşık Çelebi was born in a village called Vılçıtrın in Prizren, one of the important cities of the Balkans. Âşık Çelebi, who spent a significant part of his education life in Istanbul, subsequently carried out a significant part of the civil service he had undertaken within the Ottoman bureaucratic structure in various cities within the borders of the Balkans. He settled in some Balkan cities on the occasion of his duties and lived there for a long time; Of course, he had the opportunity to travel to nearby cities, as he stated in his biographer. For this reason, in Meşâ'irü'ş-Şu'arâ, which is Âşık Çelebi's collection of poets, it is possible to come across various impressions about the Balkan cities. While these cities sometimes come to the fore with their physical features, they are sometimes the subject of bio-cultural structures or the beautiful feelings that the poet awakens in his soul. While some cities are explained in detail with various aspects, some cities are only mentioned for certain reasons. In this study, information about the Balkan cities that Âşık Çelebi referred to on various occasions in his biographies of poets called Meşâ'irü'ş-şu'arâ will be tried to be given based on the examples in the tezkire. 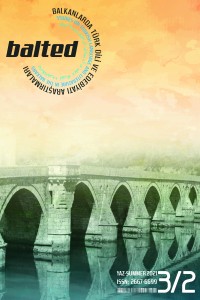