Islamization of Turks with a state identity and in large masses was in the 10th century during the Volga Bulgars and Karakhanids. Annals in early period are narrated from travelogue, history, geography books such as al-Rihla, al-Kamil, Mulhaqat al-Surah, Taʾrih al-Kashgar, Hudud al-ʿAlam in languages other than Turkish. Turkish manuscripts about this period are generally collection of biographies and legends, translation or copying dates of which points to considerably late times. The manuscript written and completed in 1219 (1804 AD) is a collection of Uwaisi biographies containing legend of Abu Nasr al-Samani (pp. 75a-83a) and Bughra Khan (pp. 83a-102b). In this study, being the first academic publishing of the manuscript registered under Or. 8161 in British Library, on various editions of manuscript and academic publications relating to this work are evaluated and from a historical perspective Turks’ conversion into Islam is mentioned. Also this paper includes transcription and translation of Abū Naṣr al-Sāmānī’s text which is about period of Turks’ Islamization with legendary narrations in the manuscript registered under Or. 8161 in British Library. Additionally, grammatical analysis of text taken into consideration is made. Throughout the manuscript Chagatai elements outweigh, and it is seen that, elements dating back to 14th century Eastern Turkish are preserved especially in poems. In this regard it can be said that this manuscript, which is a translation from Persian, is an early translation and a late copy. 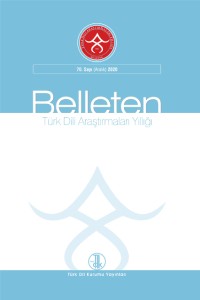