Physical, mechanical and some thermal properties of gypsum-wood mixture particleboards were analyzed for specimens which were prepared in different proportions previously conditioned at 23 ˚C and 65% relative humidity. Water absorbtion (WA) and thickness swelling (TS) properties were measured after soaked in water for 24 hours. Furthermore, the increment of wood particle was increased the water absobtion values around 28.5 % and 2.1% thickness swelling values, respectively. However, the reduction of gypsum ratio was negatively effected the mechanical resistance of the boards. The highest MOR, MOE and internal bond (IB) values were observed in the C1 code board with 4.73 MPa, 27.04 MPa and 0.97 N/mm2 respectively. The thermal conductivty of wood-gypsum boards were ranged from 0.7404-0.5021 W/mK. The highest density was found in C1 type board as 1.333 kg/m³ and also the highest thermal coductivity was observed at the same sample. Besides, the highest surface temprature which was passed to opposite side of flame source, was found in C5 as 141.7 oC after 300 seconds. However, the lowest value was observed in C1 type board as 93.3 ˚C after 300 seconds. 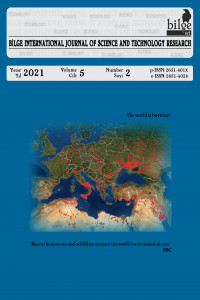