During the 75 years following Ahıska Turks’ expatriation from their homeland in Soviet Georgia in 1944 to the Central Asian Soviet Republics, they have evolved into a multilingual society. Ahıska Turks use Turkish and Russian language pairs in their daily communication. They adopt code-switching strategies in their daily communication. Turkish-Russian code-switching pattern of Ahıska Turks was not analyzed linguistically in terms of bilingual communication. Therefore, this study aims to investigate Ahıska Turks from a different perspective. It reflects the code-switching situation by examining the Bishkek show of Miko Şov, an Ahıska Turks’ comedy group. The records were investigated based on the Matrix Language Frame Model and the pattern is divided into categories as nouns, adjectives, adpositions, verbs, and adverbs. It is determined that the same strategies were followed with other Turkic languages contacting Russian. 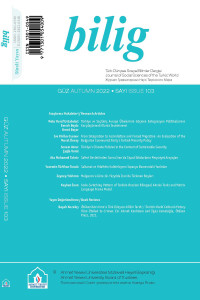