Human life occurs in various stages from birth to death. Although some different classifications have been made on this subject, we can roughly classify these periods as childhood, youth, middle age and old age. The child period, which is the main subject of our study, has been expressed by many scientists and scholars as the most important stage in shaping and making sense of other periods of life. With this study, we will try to examine how the matter of child is tackled in the scriptures. For this, we have taken as reference the Bible, the main source of Judaism and Christianity. The following issues will be examined in the light of the scriptures of these two heavenly religions: The child who is considered superior in Judaism due to his affiliation, being qualified as a sinner due to the "original sin" with her/his birth in Christianity; what kind of education he/she should receive in order to be a person who has the desired characteristics both religiously and worldly; how he/she should regulate his/her relations with his/her relatives and other individuals in the society, especially his/her parents; the responsibilities imposed by the religion and society to which he/she belongs in daily life. On these issues, especially in the Christian world, many studies with the content of "religion and children" prepared with both a secular and theological point of view have been conducted. The difference of our study from them is that we will study it by limiting it directly to the Bible instead of the historical, cultural, traditional and pedagogical perspectives and sources. 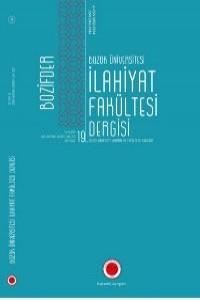