Turkish foreign policy has aimed to improve regional neighborliness and defense relations while dealing with the accumulated problems arisen due to the legacy having received from the Ottoman Empire. Therefore, the most prominent factor, precipitating this post-legacy period, is the military and political conditions offered by the results of World War One. The conditions are, indeed, a precursor to World War Two. Being aware of the status quo leading to a war, Türkiye (Turkey) has entered into international alliances and formed regional defense pacts. Nevertheless, the agreements have not proceeded as expected due to the problems, posed by the history of the countries, needed to be overcome. Herein, Greece has a substantial degree. It can be stated that the approach of the decision-makers of Türkiye and Greece towards the solution of problems via pragmatic and rationalist policies has caused either hastening or suspension. This research study focuses on Greece’s intra-political objections before and right after the agreement of the Balkan Entente as per the records of the Turkish Embassy in Athens. It is aimed to illustrate that the alliance and, thus, much-needed improvement of Turkish - Greek relations are deemed a requisite thanks to the pragmatic (realpolitik) approaches despite the countries’ opposition sides at the threshold of a war threatening both countries. 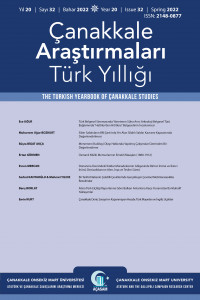