God and Human Conceiving According to Sehbenderzade Filibeli Ahmed Hilmi

This article aims to examine the views of Şehbenderzâde Filibeli Ahmed Hilmi about God and man. The opinions of Filibeli, one of the last period Ottoman thinkers, on the concepts of God and humans are philosophical and mystical. When positivist thought, which denies God and spirit, became widespread, Filibeli's defence of religion was based on the view of Wahdat al-wujud. Filibeli, who argues that there is only one truth with the attribute of existence, defines man as a manifestation and reflection of Allah's command, will, and power attributes. According to him, man is the unity of soul and body. The only being with a personality on earth is man, and this feature gives him understanding and morality. The only be-ing with a personality on earth is man, and this feature gives him insight and morality. Although He realized that such interpretations, especially seen in Western thought, would lead to secularization and from there to deism, and gave weight to the concept of God embodied in the idea of unity of existence with a unique interpretation. The human interpretation of Filibeli, who reduced the truth to a single entity, is in a close relationship with the spirit and religion. We believe that examining Filibeli's views in this period when anti-religion gained momentum under the shadow of secularism will contribute to the solution of today's prob-lem of creed and kalam. 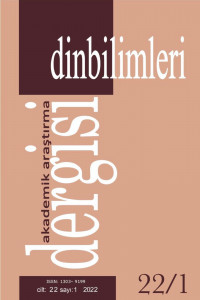