A TEXT LINGUISTIC ANALYSIS: ÖYLE BİR GECE STORY BY RASIM ÖZDENÖREN WITH REGARD TO COHESIVENESS ELEMENTS

The first story of Rasim Özdenören, one of the important names of modern Turkish storytelling after 1970, titled Flowing Water (Akar Su), was published in Varlık Magazine in 1957. Özdenören, who wrote a total of ten story books until 2009, expressed the spiritual disintegration, depression and identity search of the individual who tries to adapt to the changes and developments in social life, generally on the axis of Westernization. He evaluated the social issues on the basis of the family and used the dissolution in the family as a tool to criticize the dissolution in the society. Accordingly, the introduction/development/conclusion of their stories is not the usual, but a stream of consciousness sequence. The author used a metaphorical, abstract, internal or external reference language in his stories. In this research, Rasim Özdenören's story titled Such a Night (Öyle Bir Gece), which is included in the story book titled Impossible Stories (İmkânsız Öyküler), published in 2010, has been analyzed according to the one main criteria for the textuality of literary products, cohesion, and the sub-titles of these title. For the research, which was designed in accordance with the case study, which is one of the qualitative research methods, the data collected by document analysis were deciphered with the content analysis technique. According to the research findings, this story, which is apparently slight but profoundly intense in semantic field, was fictionalized upon a strong system of word and sentence cohesion. 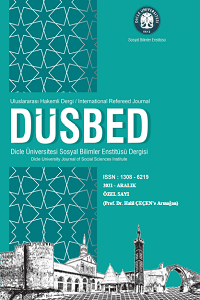