Forming an important part of the vocabulary of a language and being one of the universal dictionary categories, verbs can be classified by their morphological, syntactic and semantic features. In modern linguistics studies, verbs are the basic element of the sentence and are in the executive position in the sentence. Therefore, verb classes are defined by the members they are associated with and the semantic roles of these members. Mental verbs are also included as a verb category in some of these studies and described with their syntactic behaviors. On the other hand, the classification of mental verbs on the basis of mental processes is emphasized and verb lists belonging to sub-process types are given in mental verb studies conducted in Turkey. However, such an approach is not sufficient to explain the semantic features of Turkish mental verb class with its all aspects. In this study, first of all, the conceptual framework created for the mental verb category in linguistic studies conducted in Turkey and in the world were evaluated, and later on, by briefly explaining the valency theory, semantic roles of Turkish mental verb complements were determined in the light of case grammar. In addition to this, attention has been drawn to semantic structures that can be formed by Turkish mental verbs when they are analyzed with their semantic arguments. Since mental verbs are an interdisciplinary subject, semantic features of the mental verb category must be discussed based on both the data presented by cognitive psychology about mental processes and linguistic approaches. In this study, mental verb lists presented in studies in Turkey were evaluated from this point of view. Thus, it is aimed to contribute to mental verb studies to be carried out on both the historical and contemporary dialects of Turkish. 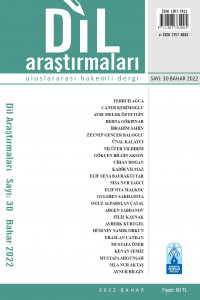