Semiology is an analytical approach that examines how narrative texts are structured by revealing their structural features. It provides to reveal the grammar of the narrative by determining the semantic and discursive planes that structure the texts. It was defined by one of its founders, Ferdinand de Saussure, as the study of “the life of signs within society.” In this study, the semiotic analysis of Cemil Kavukçu’s story titled Ablam, which has an important place in Turkish literature after 1980 with its storyteller identity, is aimed. This qualitative study was carried out with the document analysis model. For this purpose, first of all, the text is divided into chapter and sections, and the general arrangement of the narrative is revealed. Then, within the framework of Greimas’s example of actors, the actors are determined and the axes that establish the relations between them are determined, the action, competence, action and sanction processes and modalities that make up the narrative program are shown. Then, figurative contrasts were determined, space and description, use of time, point of view and thematic roles were revealed. Since bodily expressions have a very prominent function in the construction of meaning, they were also included in the study. Thus, the grammar of Cemil Kavukçu’s narrative has been revealed. In addition, it has been concluded that semiotic analysis is related to many of the reading comprehension achievements within the framework of Turkish teaching. 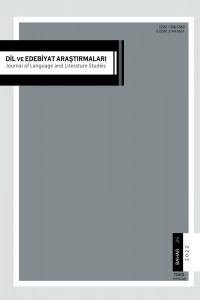