Rock salt is one of the major sources of salt and it has a vital importance for living. Rock salt caves are used for produce salt, speleoterapi, art applications, tourism, recreation and storage purposes in the world. This study was carried out at Çankırı Salt Cave and its environs, in Balıbağı Village in Çankırı Province’s borders. The study was realized in the Çankırı Rock Salt Cave for using of oriented recreational and tourism. Çankırı Rock Salt Cave’s tourism - recreational potential and problems have revealed based on obtained the datas, SWOT Analysis, Visual Landscape Values and Slope Analysis, made with GIS (Geographical Information Systems) analysises. Oriented recreational and tourism in use of research area, it was determined that the most important obstacle is legal-administrative problems. In this study, Çankırı Rock Salt Cave was evaluated with own properties, its near surroundings and the city’s recreation and tourism opportunities. Accordingly, it was proposed, recreational use of areas because of slope is more appropiate near the road around cave, the use of health tourism as the cave has a convenient environment for speleotherapy (Dede, 2011), for that purpose setting of Health and Spor Complex out of the cave, supporting of existing statues inside the cave with various art objects (salt fall, reliefs, maquettes), giving a place like use of a restaurant, WC, sales units, landscaping around the cave entrance and being associated with potential touristic and recreation areas in Çankırı city and the cave neighborhood. 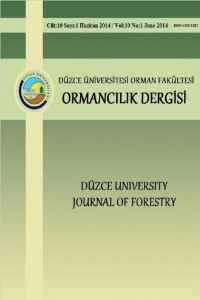