Yeni Kalem is a literary, social, and humorous magazine published between 6 October 1927 and 5 April 1928 under the leadership of Orhon Seyfi [Orhon]. Signed and unsigned works of many poets and writers were published in this weekly magazine consisting of 25 issues. One of these people is Kamuran Serif [Saru], who is mostly known for his translations. Although he was usually known for his translations, he was also known for his stories, theatres, poem translation, and criticisms in some magazines and newspapers of his time. The author has three humorous theatrical texts with his fourteen stories in the Yeni Kalem magazine, which was published with Ottoman Turkish scripts in the first years of the Republic. In this respect, this study discusses the place and literary aspects of Kamuran Serif, whose name is rarely mentioned today, by reminding his texts in Yeni Kalem magazine. The study discusses the place and importance of periodicals in our literature, then provides information about the publication process, purpose, shape, and content features of Yeni Kalem magazine and the authors. Then, it discusses Kamuran Serif’s writing activities and works. It also examines the author's stories and theatrical texts published in Yeni Kalem in terms of content, theme, language, expression, and style, thus assessing the literary aspect and value of the texts. 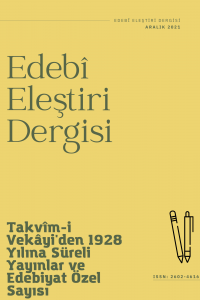