Microbil activity is one of the important process for biochemical cycles in soil and forest floor of ecosystems. Because, , the carbon dioxide and nutrients needed by plants are released during the microbial activity. In this study, we were investigated releationships between environmental factors (mositure, temperature, pH, electric conductivity, C, N, Na, Ca, Mg, K, P) and seasonal variations of microbal respiration, microbial biomass-C and metabolic quotient (qCO2) in the forest floor and soil (0-5cm) under three adjacent Abies plantation plots (Abies nordmanniana ssp. bornmuelleriana Mattf. (Ab), Abies cilicica Carr. (Ac) and Abies nordmanniana ssp. nordmanniana Mattf (An)) in Atatürk Arboretum located in Istanbul-Turkey. Sampling was carried out by collecting bimonthly (from May-2012 to March-2013) both soil (54 sample) and forest floor (54 sample) samples within each species. According to the results of the study, soil microbial respiration (SMR) has significantly lower value in Ab plot. Although SMR and soil microbial biomass-C (SMBC) were correlated with moisture and temperature in An plot, they were correlated with nutrients in other plots. In general, an increase in soil respiration rates was showed in autumn and early spring. Forest floor microbial respiration (FFMR), microbial biomass-C (FFMBC) and metabolic quotent (qCO2) did not differ among the plots. The measured FFMR, FFMBC and qCO2 parameters were lower in autumn than spring. Forest floor microbial parameters were drived by the variation of nutrients amounts. As a result, microbial processes in both soil and forest floor changed with the effect of different factors although there was no clear difference among the plots, 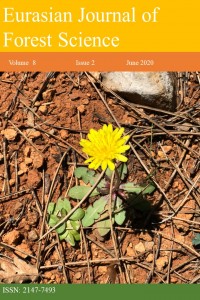