Air pollution is one of the biggest environmental problems that threaten human health today. The aim of this study is to investigate the effect of nitrogen dioxide (NO2) air pollutant on mortality in Sakarya. Air pollutant data were obtained from the Ministry of Environment, Urbanisation and Climate Change (MEUCC), and population and death data were obtained from the Turkish Statistical Institute (TUIK) database. For the population aged 30 and over, estimated attributable proportion (EAP), estimated number of attributable cases (ENAC), and estimated number of attributable cases per 100,000 (ENAC/100,000) population at risk group were calculated with AirQ+ software in 2018 and 2019 for cut-off values (COV) of 20, and 10 μg/m3. In Sakarya for 2018 and 2019, the mean concentrations of NO2 were determined as 28.12 and 31.50 μg/m3, respectively. Due to the increase in 2018 and 2019 annual NO2 concentration, was increased from 3.21% to 4.52% and from 7.02% to 8.28% for COV of 20 and 10 μg/m3, respectively. It has been observed that the World Health Organization (WHO) decreasing the air quality guideline level for NO2 resulted in an increase in death rates attributable to this pollutant, as expected. 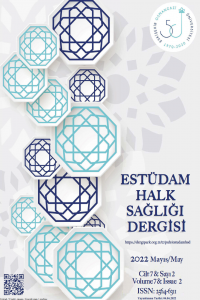