In this study, it was aimed to evaluate the relationship between Sick Building Syndrome (SBS) prevalence and indoor air quality in primary and middle schools in rural and urban areas in the west of Turkey. This cross-sectional study was carried out between September and November 2018 in three randomly selected schools in rural and urban areas. The questionnaire designed to reveal perceived indoor air quality and SBS was completed by the parents of the students. On determined days, particulate matter (PM) and carbon dioxide (CO2) levels were measured in the classrooms. Multiple logistic regression model was developed to investigate the relationship between SBS and some variables. The study was conducted on 966 students. The prevalence of SBS was found to be 10.2%. The most common SBS symptoms were listed as fatigue, nasal congestion-discharge, cough, and headache, respectively. The measured PM2.5, PM10, and CO2 values were higher in the urban area than in the rural area. The risk of SBS was found to be higher in primary school students, in students who have poor perceived classroom air, lighting, and noise quality, and in students studying in classrooms with higher PM2.5, PM10, and CO2 values. One in ten students had SBS. There was a relationship between SBS and poor perceived indoor air quality and increased CO2 and PM values. Raising awareness about SBS and conducting studies aimed at improving related factors in schools are thought to be important. 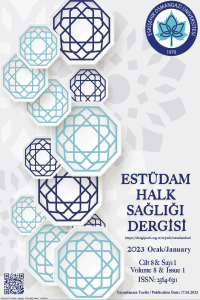