İye (angel in Tengrism) are always a topic in the center of attention of researchers. The mystery is still not fully resolved. Despite hundreds of studies, God, it’s angel and demons are still attracts the attention of researchers. In our opinion, the reason that delayed getting the right result so long, was mostly to search for the iyes only in the folklore of the Siberian Turks. . It is a fact that the Turks who accepted Islam replaced the iye with the angel over time. Mostly, researchers often wanted to look for the traces of the iye in the Siberian Turks, who still remained in their old belief. In the research, it is possible to say that the iyes are generally exist in the mythological texts of all Turks. Although this sometimes remains in an idiom, sometimes in a fairy tale, and sometimes in beliefs, it has not been completely erased from the memories. Sometimes it is possible to see the existence of iyes that don’t attract the attention of researchers because Islamic names or motifs are added. In fact, they were often called iyes, and they were investigated in terms of iye, and unfortunately, wrong results were obtained. The aim of this study is to research the members of Şulum, Çer, Çor, and to determine the place of the members and us yey in Tengrism. Besides, to research the meaning of all three demons (bizden yey) the meaning of their names. In this article, general information about iyes is given again by using field research, scanning method and comparative method, and the confusion of concepts between iye and bizden yey is investigated. The characteristics of the members of Şulum, Çer and Çor were learned. 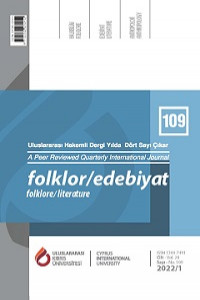