Reflections of the Informal Sector on Households: Women Cracking Pistachio in Gaziantep

This study examines home-based work in the informal field, which is an intense working form of women, in the light of critical feminist theoretical and methodological discussions, through women who break pistachios, which would set the context for local working conditions. Within this framework, reflections of the informal sector on the labor markets both in the world and in Turkey are briefly introduced in conceptual and historical themes. Later, labor-capital contradictions in the informal sector and the most dramatic consequences of this contradiction experienced by women which were overlooked by mainstream economic methods and statistics, will be discussed. In response to this introduction, the processes of informal labor the pistachio-cracking 6 women in Gaziantep went through and how this labor was transformed with flexible employment policies and neo-liberalism have been questioned. In this context, the exploitation of women's labor through competitive capitalism and patriarchal political-cultural practices are exemplified by the informal domestic labor processes of the pistachio-cracking women in Gaziantep. Beside these discussions, interviews have shown that the “invisibility” of women's work, which is considered mundane in the home, has increased. However, despite these negativities, it has been determined that women also meet their vital needs with this capital they have obtained. Finally, the distinctive characteristics of the informal sector, such as poverty and social insecurity, were also encountered in the statements of the interviewed women and it was determined that the combination of capital and patriarchy strengthened the secondary position of women. 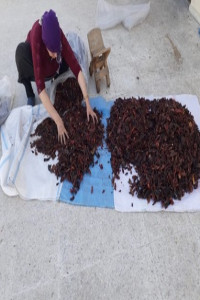