Caucausus is of great importance for Turkey geopolitically. This region causes both the road to Turkistan and Russia to reach energy sources. Therefore this country is not only preserving its own important but also important for the Ottoman Military deputy Enver Pasha to serve the Turan ideal. When we interpret the history, it is a long term plan that the Ottoman Empire was allied with the Germans in the First World War and entered into the armistice with the Russians on the Caucasion front. This strategic goal re-raised the reputation of the Ottoman Empire, which is described as collapsed after all the Ottoman Empire became an ally as socially, economically and politically in the international arena, which determined the course of war in the end of First World War. As a matter of fact, the events developed to meet the goals in the long term and the Ottoman staff management tried to renew their reputation with the operation of Sarıkamış Ihata. The agenda created after the operation blocked and painted an mage beyond reality. When we look at our past from today, we come accross many comments and numerical data about the operation.

In this study, firstly, the blockages that started in the 19th century in the pre-war arena and the causes of the first world war will be emphasized. Disarmament movements that emerged as a result of exploration and reforms and inter-state raw material and colonial searches in the developing world socities had an effect that attracted the Ottoman state, which has political and strategic importance to war. During this period, the trilateral alliance between Italy, Germany and Austria were the rivals of the trilateral confrontation world war established by France and England. The Ottoman State was forced into the search for an alliance to enter the first world war due to internal confusion and the perception created by the external forces towards the minorities inside. After the Ottoman state was rejected by France and Britain, it signed an aggreement with Germany in August 1914, intervened in the war and changed the course of the war. In the next part of the study, the strategic importance of the geography where the Caucasus is located in terms of Ottoman state was emphasized afterwards, the effects of the protection of the war in the direction of the short and long term political goals that occurred due to the conditions resulting from entering the war will change.

Two Turkish corps under the command of Enver Pasha, who surrounded Sarıkamış on 28 December, had a collision with the Russians and both sides suffered high losses. The withdrawn Ottoman army theoretically carried out the plan on the Russians, and achieved success with a physchological victory in a longrun. As a result of the three-year Ottoman Russian war, there became a revolution in Russia and the Russians withdrew with the help of the men sent by Enver Pasha for rebellion. Finally, in this study the operation in Sarıkamış was examined in terms of agenda. While the facts are accessible in the sources, the first learned and created perception cannot be thrown over the society. The facts recorded for the Operation Sarıkamış are forced to explain themselves in the face of lies. The reason for this is that the agenda is determined by malicious circles and negative images. Whle criticizing the postponement of the operation to the spring months, there is a situation to be understood. The operation was to be the first weapon to hit the enemy in difficult conditions and this is what creates defeat to the enemy. It is obvious that this time was chose, which printed this operation in gold letters.

The Turkish soldier, who crossed the mountains of Allahuekber in winter, achieved a great success. Nevertheless, the agenda setters aimed to mislead Turkish history by defeating the ideology of Enver Pasha with false news. In forming this agenda, the ideological thoughts and hatred of Enver Pasha they inspired from their inner worlds constituted the reference of these theses. Enver Pasha’s grandson Osman Maypetek underlined in his report to the Vatan newspaper on January 11, 2014 that Enver Pasha was badly misled and that Russian propaganda was carried out in Anatolia, too. Maypetek said that, Sarıkamış is an unprecedented success in history and stated that the soldiers there fighted heroically. He stated that this public opinion is a magical comment and serves the Russian propaganda. In the light of all these data, Sarıkamış historical operation does not appear to be accepted by the society. This is due to the fact that the history written is not an accurate source, and the operation fell into a network of political agendas. The narratives of the actors accepted by the society in a magical way by following a dominant method have covered the real face of the history, mislead the society, defaming this movement that market the history of Turkish.

The Caucasian Front, which opened against the Russian forces in the First World War, is important because it is seen as the gateway of the Turks to Turkistan Geography and it is the first front in the defense of Anatolia. Enver Pasha, who realized the power of Russians on this front and predicted the future, prepared an offensive plan with the desire to not transfer the door to the Caucasus. This plan continued with Turkish offenders sent to the Caucasus and Russia region with Enver Pasha's predictive attitude in the background. While the attack was met by the Russians as astonishment and psychological delusions, he had gained the Ottoman psychological victory under the command of Enver Pasha and both parties collided and gave mutual casualties during the hot encounter. It has been an operation that has printed Turkish success, belief and courage to Russian resources, and succeeded by the enemy pen. In the long term, the rebellion by Enver Pasha sent by the agents, Russia has caused the revolution in Russia has been completely withdrawn from the borders and Sarikamis Heritage Operation as the name of a long-term victory, the history has been written among the covered reality. The Ottoman Empire, which was 70,000 people, was attacked by a mob of 90,000 soldiers, who claimed that 90,000 soldiers had been killed by freezing without encountering Russia, and that they had been killed by Russia. While the losses in Russian and Ottoman sources have fallen apart, the act of doodling these facts without reference to the sources has come to light today. In this study; We will judge the created agenda by looking at the window of facts before and after the Sarikamis Ihata operation. Keywords: Create an Agenda, Attack Operation of Sarıkamış, Enver Pasha. 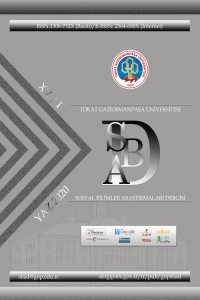