The category of the Southern European welfare regime type has basically composed of four countries; Italy, Spain, Portugal and Greece. Turkey’s place has been discussed in the Gough’s article (1996) because of its welfare regime, its division of social responsibilities among state, family and market analogous with the Southern European countries. In the field of health, as a part of social services, Italy and Turkey implemented a similar universal health reform package in 1978 and 2003, respectively, and the similarities and differences between these two countries should be analyzed within the framework of the Southern European welfare regime framework. In this point, the research question can be summarized as follows: How can these universal health systems of Turkey and Italy be compared in the framework of the Southern European welfare regime model? In this paper, we would like to focus on the Italian and the Turkish health care provisions under two dimensions: the provision of health care and the health care expenditure based upon OECD and WHO 2014 reports and with valuable contributions of the scope of related readings. 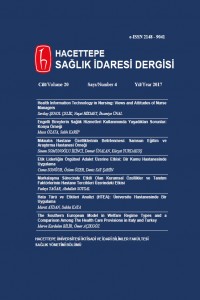