Mustafa Kutlu, who gained a significant place in Turkish storytelling after 1970, created a unique style with his view of the eve, sincere expression style, understanding of art based on tradition and indigenousness. Generally, he handled people around family, society, religion, culture and civilization in his stories about events and people that can be encountered in daily life. At the same time, he touches on the negative reflections of this on individuals in his works on the social change and transformation that Turkish society has undergone. In this context, in some of his stories, he explained the effects of degeneration and depreciation that increase with modernization, urbanization and internal migration on people. In this study, the author's long story Chef is examined in the context of corruption and loss of values, based on the prominent figures in fiction. In the article, first of all, the concept of the corruption and the loss of values is emphasized, and then the appearance and reflection of these concepts and phenomena in the stories of Mustafa Kutlu is mentioned. Later, the title of the work was evaluated in the context of degeneration and depreciation around the naming of the story persons, the characteristics of the characters, their lives, thoughts and dreams. The dissolution experienced by people and its social reflections are included. In Chef, Mustafa Kutlu talked about the victims of their desires and ambitions around issues such as urbanization, tradition and modernization, and examined the values and beauties that these people lost through their life stories. Worldly desires, money and material desires in pursuit of family members in a striking demonstration has been revealed. 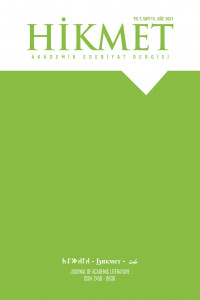