THE EFFECT OF YUNUS EMRE IN SULEYMAN COBANOGLU’S POETRY

Yunus Emre, one of the guides of our world of art, culture, belief, and thought is one of the rare personalities who have survived with his thoughts and works. He has been a universal personality with his understanding of poetry/art, which is based on concepts such as love, peace, and tolerance, which prioritize human and human values, as well as religious and mystical sensitivity. Yunus Emre, who sang the simplest poem in Turkish at his age, influenced almost every period and every phase of Turkish poetry. The poet nurtured Classical and modern Turkish poetry from various aspects as well as affecting the Folk/Tekke poetry. Therefore, it can be said that he played an active role both in the establishment of a poetic language and in the formation of a strong poetry tradition in Turkish literature. The poet, who shaped modern Turkish poetry in terms of form, utterance, harmony, theme, language, and style, also influenced Turkish poetry and poets in some ways after 1990. Suleyman Çobanoğlu, who is among the 1990 generation poets, is one of the poets in whose poetry Yunus Emre’s effects are clear. He attracted attention with his unique voice, sense, and sensitivity in Turkish poetry after 1990, combined modern poetry with the poems he wrote in syllabic meter and became unique in today's poetry with his troubles and issues. While the poet is searching for his voice and composing his poetry, he has accepted the main poets of Turkish poetry as his guide and expressed them on various occasions inspired by them. In this context, Yunus Emre, the deep and enthusiastic voice of the past ages, is one of the names that influenced the poet. This study examines the effect of Yunus Emre in Suleyman Çobanoglu's poetry from various aspects. It shows the traces and voices of Yunus Emre in the poems, especially around the titles such as form, theme, harmony, utterance, language, style, and intertextuality. 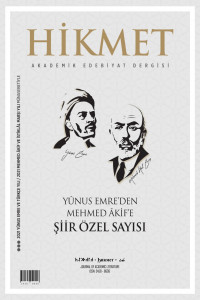