The Rise of Turkey’s Soft Power in Africa: Reasons, Dynamics, and Constraints

Since 2005, with the ruling Justice and Development Party (AK Party) governments, the African continent has gained a great importance in Turkish Foreign Policy. Turkey's soft power policy is one of the most important tools in the development of multilateral relations with Africa. Turkey has been making significant cooperation with African countries in the fields of military and defense in recent years. For example, Turkey's largest overseas military base was opened in Somalia in 2017. However, Turkey's soft power prepares a very important strategic ground for deepening relations with the continent in the political, economic, social, and security fields. The ruling AK Party governments have moved Turkey's relations with Africa from an ideological dimension to a strategic one, revealing that the African continent has a strategic meaning for Turkey. The research argues that Turkey’s soft power strategy toward Africa has been influenced by several factors and dynamics including historical, geographical, political, and economic. This study aims to contribute to the literature by analyzing Turkey’s soft power policy in Africa in a conceptual framework and holistic approach. 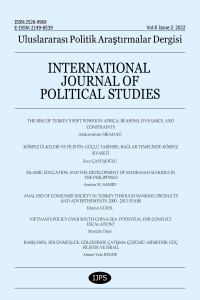