In this study, the ghazals registered with the Hüseynī maqam 163, 187 and 189 in the Niyāzī-i Mısrī Dīvān prepared by Kenan Erdoğan were examined. Each couplet of the determined ghazals was dealt with separately, and the transcribed text and explanation was made by giving it in today's Turkish. Details of some concepts and sentences in couplets are included in the explanation of ghazals in order to better understand the subject. It is aimed to explain the views and mystical interpretations of Niyāzī-i Mısrī on the subjects of "vahdet-kesret", "zuhd-ashk" and "tecellīyāt" through these ghazals. In ghazals, ‘vahdet-kesret’, ‘zuhd-ashk’ and ‘tecellīyāt’ are the main subject. Therefore the narration is enriched with extensive explanations and various examples on these topics. Again, in the explanation of the couplets, quotations from the Quran and hadiths are included. In the ghazals, the elements related to language are not mentioned, but the content of the couplets, the world of meaning and their mystical explanation are included. With this study, it will be possible to enter the world of thought and feeling of Niyāzī-i Mısrī on these issues. Later, the connection of these ghazals with the authority was examined under the title of "Hüseynī Authority and Its Relations with Ghazals". In the conclusion part, the main themes and concepts of ghazals have been included and a general evaluation has been made. 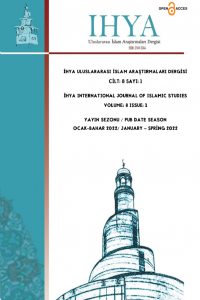