The aim of this study is to evaluate teacher-student friendship in virtual environments in terms of various variables. The working group consist of 340 teachers working in the province of Istanbul. To collect data related to the research, it is used the scale of "I am friends with my students on Facebook" and "I am not friends with my students on Facebook" developed by Akkoyunlu and others (2015). The study was conducted in a screening model, which is one of the quantitative research designs. The obtained data were analyzed by t-test and ANOVA tests with analysis program, and the results were presented in tables. In the analyzes, the aspects of teacher-student friendship in virtual environments, the differentiation of teachers being friends with students in virtual environments in terms of their gender, age, occupational seniority variables and the relationship between of social media friendship and perception of teaching were investigated. As a result; the level of teachers' friendship with their students in virtual environments is found to be low. The reasons for this have been determined as to think that teacher-student relations should be official, to feel not comfortable sharing, to think that the authority is shaken, to protect private life. It is also concluded that teachers do not care about the social media friendship. When the situation of controlling social media accounts in working hours of teachers who are friends and not friends with students in virtual environments is examined, it is concluded that teachers who control social media accounts during working hours in both groups have higher level of school perception. When the results are examined in general, it is concluded that friendship with students in the virtual environment is not related to responsibility, student, professional identity and school perception. 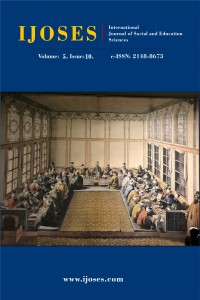