The Woman and the Self in Jale Sancak's Novel Uyanan Güzel

In this study, the content analysis was carried out within the framework of selftheory with the focus on the self-construction process of Vahide, the female character of Jale Sancak's novel “Uyanan Güzel”. Jale Sancak questions the existential pains of women who are trapped in the patriarchal society, locked in their homes due to various dimen-sions of violence, marginalized and silenced in her novel Uyanan Güzel, which we reviewed. In her stories and novels, Jale Sancak focuses on the hidden inner worlds of women with a special sensitivity, and in her novel Uyanan Güzel points out the inner existence of women, who were surrounded by patriarchal thought patterns in childhood and handed over to the auto-control of society. It tries to create a social awareness against the patriarchal system in order to emphasize that the individuation of women is possible. The process of discovering her own individual wishes and desires of Vahide, who represents the new generation women, whose individuation is earlier and easier, is analysed. It is revealed by the synthesis of the plot and the character, which is diffi-cult, but not impossible, to create a self for women who are silenced and whose dreams are taken away. It is implied that a woman can awaken to happiness by preserving her-self without excluding men and without losing her conscience and compassion. It is emphasized that women who take the strings of their own life and open their eyes to the society as themselves can take action in the public sphere, thus achieving a holistic identity.

The novel of Uyanan Güzel, Women, Self, Gender, Patriarchy 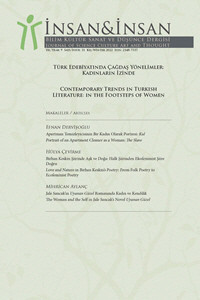