Murad V as a sultan for three months in 1876, was dethroned on the grounds that his mental balance was bad. He died in 1904 and was buried in the Cedid Havatin Tomb. In 1908, shortly after the proclamation of the Second Constitutional Monarchy, it was decided to organize the south-eastern corner of the Cedid Havatin Tomb for Murad V. The implementation of the project, which was on the agenda when II. Abdülamid was in power, was completed the following year while V. Mehmed Reşad was on the throne. The south-eastern corner of the Cedid Havatin Tomb was surrounded by iron grids and the wooden sarcophagus of Murad V was placed there. The design, which can be evaluated within the framework of the National Architecture style, consists of marble railings that surrounds the sarcophagus and iron grids placed over them. The Project was prepared by Vedad (Tek) Bey and is not included in publications on him. In the context of the article, it is aimed to establish the relationship between the political developments of the period by drawing attention to the timing of the Project. In addition, the grid around the wooden sarcophagus is examined in terms of its ornamentation characteristics, compared with the examples of the period and an attempt is made to position it within the design approach of Vedad Bey. 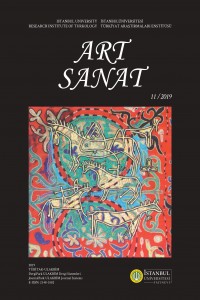