Complexes Built the Women of the Ottoman Court in the 19th century, an Evaluation of their Contribution to Istanbul’s Urban Texture

The 19th century was the century in which the urban fabric of Istanbul underwent its biggest transformation. During this period when the reform movement gained momentum, the state carried out a Western-style restructuring and introduced many new city planning regulations. Among the important developments that took place in this period after municipalities were established in 1855 were significant changes to the city plan and the building regulations put in place to facilitate and coordinate the residential areas and constructions. This process affected all spheres of society and the women of the Ottoman court emerged as commanding figures. These women left their mark on Istanbul’s urban fabric thanks to the constructions and repair of social, military, and secular architecture which they brought about either using personal savings or state funding. Modern city planning gave Ottoman construction projects a new direction, it is evident that the numbers of buildings named after and funded by the women of the Ottoman court in the 19th century gathered momentum, and these structures have left their mark on Istanbul’s skyline. This article deals with the edifices built by ladies of the Ottoman court, namely the Şah Sultan Complex (1800), the Nakşidil Valide Sultan Complex (1818), the Bezmiâlem Gurebâ Müslimîn Hospital Complex (1845), the Bâlâ Süleyman Ağa Complex (1863) and the Aksaray Valide Sultan Complex (1871). These buildings have been studiedtheir location and structural features and they were examined on contemporary maps. 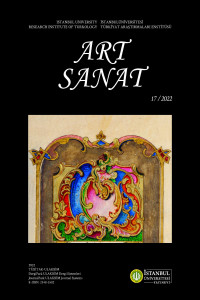