In the present study, the land use and land cover (LU/LC) of Düzce province, belonging to the years 1990, 2000, and 2018, were examined in the Western Section of the Black Sea Region. According to the data that we have used from the CORINE database, 7 LU/LC classes were defined; artificial, agricultural, transitional vegetation, pasture, wetland, woodlands and other areas. In this context, the changes have been occurred in the area (km2) in LU/LC during the 28 years from 1990 to 2018 and discussed the reasons for these changes. Also, in the study, it was revealed on which lands the changes in LU/LC were concentrated using ArcGIS 10.4 and TerrSet programs. Attempts have been made to contribute to the sustainable and efficient use of the land by associating the changes in the LU/LC of Düzce province with soil-cover, land-use capability, climate, and population characteristics. It has been noticed that a significant part of the artificial areas, which are in continuous development, has expanded towards the agricultural lands. Also, it was determined that the area that LC/LU expanded the most was agriculture, and the places where LC/LU decerased its area the most were forest areas. Therefore, we have revealed that the major reason for the negative change in the forest lands is the expansion of agricultural areas. 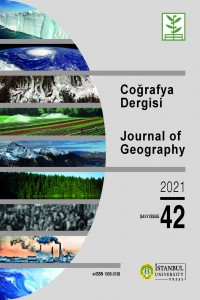