Anatolia was invaded by the Allied Powers after the signing of the Armistice of Mudros. Marash was also invaded by the British towards the end of 1918. The Armenians who had been relocated prior to this started to return to their homelands after the announcement of the ‘Decree of Return’. This could have caused some tension; however, the British did not let these tensions arise by not interfering with the lives of the locals. The British Invasion lasted for approximately eight months after which the French took over the city. The French Army was financed by Agop Hirlakian who was the richest person of the city. Hirlakian, who was a catholic, also served as a representative of Marash in the Ottoman Parliament after the 1914 elections. The people of Marash formed a national defense community and got organized. This was pioneered by people such as Evliya Efendi and Aslan Beg. Preparations were made to save all the neighborhoods of Marash. The people of Marash refused to practice Friday’s prayers when the city was under invasion and defended the city against the French and the Armenians wearing French uniforms. As a result, a war broke out which continued for 22 days and 22 nights. The people of Marash heroically defended the city. The French and the Armenians were much better equipped, and also had the numbers and psychological advantage; however, the determination of the people of Marash prevailed. The victory of Marash was honored by the Turkish Parliament and Marash was given the ‘Medal of Liberty’. The ‘Heroism’ title was given to Marash in 1973. However, it is clear that this title had in fact been given to Marash long before, and this will be discussed in the papers. In this study, the national struggle and the liberation of Marash will be examined. The fact that the determination of the people of Marash increased the moral of the Turkish nation and increased the courage of the people to save the whole of Anatolia will be examined. The main bibliography will consist of documents from the Archive of the Turkish Parliament, Republic Archives and Military Archives as well as the memoirs of the people who served in the national struggle of Marash. 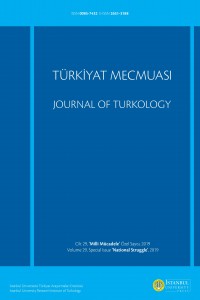