The women’s movement in the Ottoman Empire began in the free environment which was established by the declaration of the Second Constitutionalist Period. Women who began to play more active role in social and economic life as a result of the Balkan Wars were involved in organizations and looked for solutions to national issues. The Women’s Organization for National Consumption, which is one of the most important examples of these organizations, was established by Melek Hanım in Istanbul in 1913. The aim of this organization was to teach women how to sew through opening a tailor house, to manufacture domestic products and to encourage the use of domestic goods. It became one of the most remarkable women’s organizations through its activities conducted in compliance with the concept of “National Economy”. The Women’s Organization for National Consumption began to conduct voluntary aid activities for the army after the Ottoman Empire began to participate in the First World War. It provided for military families in difficult situations with financial aid in Istanbul and prepared socks, gloves and clothes which were necessary for the soldiers in the tailor house of the organization. Moreover, it opened a hospital in Divanyolu, Istanbul, for the treatment of soldiers who were wounded in the Battle of Gallipoli. The members of the organization, most of whom were educated women from the prominent military and bureaucrat families of Istanbul, not only provided financial aid in order to meet the needs of hospital, but also served as nurses at the same time. Activities such as shows, concerts, and lotteries were organized for the hospital, all the necessities of which were met by the organization in order to provide income. A cinema was operated for the benefit of the organization and conferences were held in order to raise the awareness of the public. The activities of the Women’s Organization for National Consumption which encouraged the production and use of domestic goods in the Ottoman Empire during the war years were examined in this study. The importance and place of organization in the woman organizations, which effectively conducted activities behind the front during the First World War, were identified. This article evaluates the role which the Women’s Organization for National Consumption played in the change of status of women which began in the Ottoman Empire because of the First World War. 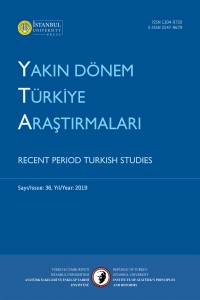