In this study, the physicochemical water quality changes in Behice village’s stream which is in the south of Çamlıhemşin district in the city of
Rize and one of the tributary of Fırtına River due to using chemical fertilizer in the region were researched within February 2011 and June 2011 (before and during
fertilization). This research was carried out along the joint forestry, forestry-agricultural and totally agricultural land of Behice, Çayırdüzü and Dikkaya Villages
of Çamlıhemşin, to obtain of the effect of the use of fertilizers around agricultural land on surface water of the stream via researching the physicochemical water
quality findings such as nitrite, nitrate, ammonium and phosphate ions as well as basic water quality parameters from 8 different chosen stations on the river profiles,
which are under the effect of forestry land without any fertilizers, tea land with fertilizers and some mixed land (of tea and forest). According to the findings of the
study, the use of fertilizers in the region is significant in terms of their effects on the water quality of surface water resources. However, it is understood that these
differences are not statistically significant in terms of time and use of land compared to other factors except ammonia nitrogen. Water quality concentrations
measured in the study are 1st class (very clean) according to Water Quality Standards of Water Pollution and Control Regulation of Turkey and they are only 2nd
class (polluted a little) in terms of nitrite. 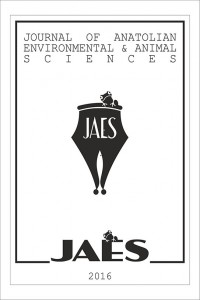