The aim of this study was to investigate the effect of whey on the immune system of cultured rainbow trout (Oncorhynchus mykiss). It was targeted to use whey, which is a by-product of the dairy industry, in the aquaculture industry as a promoter of fish immune system and as a source of fish feed protein. Rainbow trout individuals with an average weight of 70.28 ± 1.50 g were placed in 6 tanks with a stock density of 10 kg/m3. While fish meal (52%) was used as a protein source in the control group feeds, in the experimental group feeds whey powder (48%) was used. The fish were fed these pellet feeds that were isocaloric (21 kj / g) and isonitrogenous (41% protein) for 3 weeks. Blood samples were collected once a week and while hematocrit and hemoglobin values were determined using a fully automated hematology analyzer, standard hemocytometry methods were used in erythrocyte and leukocyte counts. In addition, free radical production and complement 3 concentrations were determined quantitatively. According to the one-way ANOVA analysis, the control group and the experimental group were statistically similar (p> 0,05). However, it was found that C3 complement concentration, which was measured equally at the beginning in the control and experimental groups, showed a statistically significant increase (p <0.05) in the experimental group compared to the control group in the second week. This is the first study in Turkey investigating the effect of using whey in fish feeds on the immune system of fish. 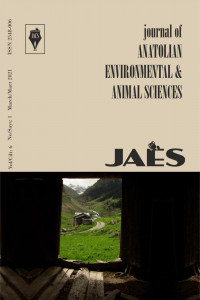