Aim: The aim of this study is to evaluate the demographic and clinic findings in immunoglobulin A-associated vasculitis (IgAV) patients with scrotal involvement and also to determine predictive factors for assessing the development of scrotal involvement. Materiel and Methods: The medical records of 181 boys who were diagnosed with IgAV in the Pediatric Rheumatology Clinic of our center between September 2015-January 2021 were evaluated retrospectively. Results: A total number of 181 boys with IgAV included in the study. Twenty-seven (14.9%) of the 181 boys with IgAV had scrotal involvement. Among the scrotal-involved patients, 160 boys (88.4%) had scrotal swelling, 120 (66.3%) had erythema and 145 (80.1%) had scrotal pain or tenderness. Scrotal involvement was the first symptom of IgAV in one patient. CRP and WBC were significantly higher in the scrotal-involved group compared to the non-involved group (p=0.018, p=0.04, respectively). There were no significant differences in clinical findings and organ involvements between two groups. On ultrasonography, bilateral scrotal soft tissue thickening was observed in all patients. In 130 of the patients (71.8%), the epididymis was swollen with increased vascularity. The size, echogenicity and vascularity of the testicles were within normal limits. Eighty-seven of the patients (48%) were given steroids, 22 of them (11.7%) nonsteroidal anti-inflammatory drug. Conclusion: Scrotal involvement in boys with IgAV is not rare, it should be considered in the differential diagnosis in patients with scrotal pain, swelling and erythema. In addition, inflammatory markers may be higher in patients with scrotal involvement. 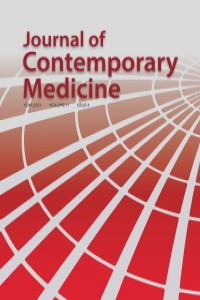