OBJECTIVE: Platelet activation is thought to play a role in the angiogenesis process involved in the pathophysiology of retinopathy of prematurity (ROP). We planned this study to investigate whether the mean platelet volume (MPV), used to assess platelet activation, could be used as a biomarker in the diagnosis and treatment of ROP. STUDY DESIGN: In our study, we evaluated infants who underwent ROP examination among infants born at 32 weeks or less and/or 1500 grams or less as well as infants who had more than these values but experienced a bad neonatal period. These patients were divided into two groups as those with and without ROP, and in those with ROP group, as requiring treatment and not requiring treatment. We recorded the patients’ identity, maternal characteristics, antenatal/natal/postnatal features, and complications during follow-up, ROP control times, and complete blood count parameters (platelet count, MPV, platelet count/MPV). Primarily, we evaluated the differences of platelet parameters, especially the MPV values, between treatment requiring ROP and non-treatment requiring ROP groups and secondarily, we evaluated the correlation between scanned parameters and ROP development. RESULTS: Of the 144 patients included in the study, 49 patients (34%) had ROP and 25 patients (16.6%) had ROP requiring treatment. There were statistically significant differences between patients who were diagnosed with ROP and who were not, in terms of gestational age, birth weight, respiratory distress syndrome, surfactant use, duration of oxygen use, intraventricular hemorrhage, patent ductus arteriosus, neonatal sepsis, number of blood transfusions, necrotizing enterocolitis, bronchopulmonary dysplasia and time to catch up birth weight. However, there was no significant difference in terms of MPV, platelet count and platelet/MPV ratio. The gestational week, invasive ventilation day and duration of oxygen use, BPD and time to catch up birth weight were found to be statistically high in treatment-requiring rather than non-treatment-requiring ROP groups. There was no significant difference in MPV, platelet count, platelet/MPV ratio among these groups. A statistically significant difference was found in the most advanced stage ROP and plus existence in the treatment requiring ROP group. CONCLUSION: As a result of our study, we could not find enough data to say that MPV is a marker that can be used in the diagnosis of ROP and in measuring the severity of retinopathy. We suggest that more studies should be done on this subject. 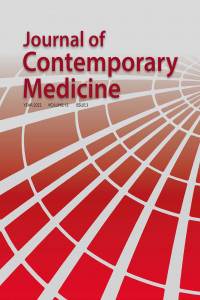