Aim: Chronic obstructive pulmonary disease (COPD) is a disease characterized by irreversible airway flow limitation and chronic airway inflammation. We aimed to investigate the clinical importance of serum prolidase enzyme, which is an indicator of collagen degradation, and Carbonic anhydrase (CA) III enzyme, which has an important function in acid-base regulation, in patients with COPD Methods : In this study, 56 stable COPD patients and 32 healthy subjects without smoking history and comorbidities were included. Serum CA III and prolidase enzyme levels were compared between the two groups. Results: The statistical difference was not found between the two groups in terms of prolidase enzyme levels (p=0.831). There was a statistically significant increase in CA III levels in the COPD group (p=0.001). There were moderate positively correlation between CAIII with partial pressure of carbon dioxide in blood (pCO2) and negatively correlation between CA III with partial pressure of oxygen in blood (pO2) in COPD patients (r:0.302, p<0.025; r:-0.314, p:0.02). Conclusions: We think that there is an important clinical relationship between CA III and COPD, and therefore, CA III may be a candidate biomarker in the follow-up of COPD. 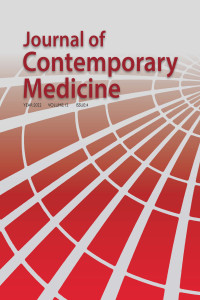