Aim: Mycoplasma hominis and Ureaplasma urealyticum species, which are the most frequently isolated microorganisms from the urogenital system, are thought to cause urogenital diseases (urethritis, cervicitis, cystitis, bacterial vaginosis). The prevalence of these microorganisms, which are often isolated from the genital tract of sexually active women, differs between studies. In addition, the antibiotic susceptibility of these microorganisms also shows regional variations. In this study, it was aimed to determine the frequency of genital U. urealyticum and M. hominis, distribution by gender, and antibiotic resistance profile in patients with pre-diagnosis of urethritis and vaginitis. Material and Method: This study is a retrospective observational study. Data were obtained retrospectively from hospital records. In the study, genital samples studied in the microbiology laboratory of a private hospital in Antalya for a period of three years between January 2017 and December 2019 were evaluated. Samples were taken into tubes that containing transport medium with sterile swabs. The presence of M. hominis and U. urealyticum was investigated using the AF Genital System (Liofilchem, Italy) (http://www.liofilchem.net/login/pd/ifu/74156_IFU.pdf) kit. Doxycycline, ofloxacin, erythromycin, tetracycline, clarithromycin, and clindamycin susceptibilities of the agents were determined in the samples which growth observed. Sowing of the swab samples taken from the patients was done in accordance with the manufacturer's recommendations. The strips were incubated at 37°C for 24–48 hours. At the end of the incubation, the results were evaluated according to the color changes. Results: A total of 245 patients, 147 (60%) men, with a mean age of 31±10.22 years, were included in the study. Of the 245 genital sample material cultures sent, only M. hominis was isolated in 55 (22.4%), only U. urealyticum was isolated in 27 (11.02%), and both bacteria were isolated in 87 (35.5%). Antibiotics with the highest susceptibility rates of the studied strains were which, for M. hominis doxycycline (83.1%), clindamycin (69.7%), tetracycline (61.9%) while for U. urealyticum was doxycycline (79.8%), clindamycin (71%), and tetracycline (65.7%). In the evaluation of factors according to gender, the rate of cultural positivity was statistically higher in women (p <0.05). Conclusion: This study emphasized the importance of culture results in the treatment of genital infections caused by U. urealyticum and some genital mycoplasmas. 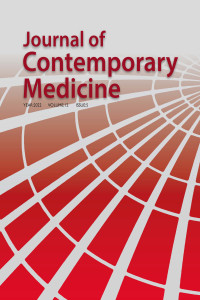