It is crucially important to follow up recent approaches in composition training. It is crucial to know; the meaning of twelve tone technique, how variety of forms are determined, how fret classes and sequence number are determines, how a series can be distinguished in a cluster, how all forms of series can be listed and how the position of forms of series in twelve tone composition education and analysis. Today, the Twelve Tone Technique still preserves its style in composition. Following the 1st World War, there happened advances almost in every field. Twelve Tone Technique, is amongst the manifesting trend in the field of music.  When Schoenberg composed his first Twelve Tone piece in 1920 (Prelud; Op.21 Suit), this opened a new door into the 20th Century music. With this opening, chromatism was extensively used by composers. The use of Atonality or the feeding of non-tonal centered music with chromatic materials created the base of Twelve Tone Technique (TTT). Free Atonality revealed with extended use of Chromatism in early 1900’s and development of this technique in 1910 which can be termed as decent of tonal system. The methodology developed by Schoenberg used also this. There are several concepts within the structure of TTT. The most important structure of this system is the material of series. So called serie can be used at four different structure. Abbrevations and terminology used at TTT structure are termed as; Prime-P, Retrograde-R, Inversion –I, and Retrograde ınversion –RI. For each four scale, there are 12 transmission possibility. Thus, it is reached up to 48 scale. Basically, Twelve Tone study includes the presentation of scale forms with diversify. 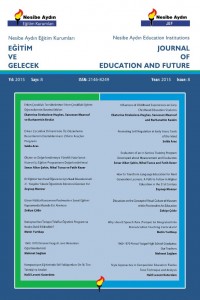