THE RELATIONSHIP WITH FINANCIAL DEVELOPMENT AND ECONOMIC GROWTH: AN EMPIRICAL ANALYSIS ON FRAGILE FIVE COUNTRIES

Many indicators are used to measure the macroeconomic performance of countries. Economic growth, which
represents the real increase in the total value of all goods and services produced in the economy, is among the
leading targets of governments. Studies stating that financial development has positive effects on economic
growth are frequently encountered in the literature. In this study, dynamic panel data analysis was used to
examine the relationship between financial development and economic growth with the data of 1990-2019 for
Brazil, India, South Africa, Indonesia and Turkey, which are called the Fragile Five. The Common Correlated
Effects (CCE) estimator developed by Pesaran (2006) was used to obtain the result that the series are
cointegrated by the Westerlund (2006) panel cointegration test, which takes into account the cross-sectional
dependence and heterogeneity. The findings show that financial development is statistically significant on
economic growth throughout the panel. A 1% increase in financial development reduces economic growth by
0,63%. There are differences in the mentioned coefficients for countries. 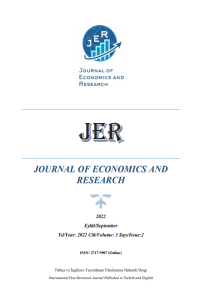